A fundraising plan contains pertinent information relating to your forthcoming campaign and functions as a guide to keep your entire team on track toward a common goal.

Luckily, here at Snowball, we know all about reaching fundraising goals in the most effective ways possible. Through our years of fundraising experience and assisting individuals, groups, and organizations to bring in the funding they need, we know how to help you too. And we understand that the process can seem overwhelming at first!

That’s why we’ve put together this informational guide to help prepare you for a successful political campaign. Here, we’ll cover the following key topics:

Feel free to skip around to the sections that interest you most—though we recommend reading along from the top to make sure you get everything you need to know.

Now, are you ready to learn more about enacting your own political campaign fundraising plan? Let’s jump right in.[boc_spacing height=”1px”]

Whether this is your first-ever political campaign, or you’re working with a group of highly experienced fundraising pros, you likely have a few unanswered questions about the whole process. We’re here to provide you with the context you need:

How do political campaigns raise money?

Political campaigns raise money in largely the same way any fundraiser does—by appealing to audience connections and utilizing the right tools to draw in donations. In the case of political fundraisers, support is often drawn from local individuals who would like to see that candidate be elected a political official.

Then, the next step involves determining which fundraising ideas will work best with your particular network of support. For example, if your typical campaign donor is a Baby Boomer, studies show that they’re more likely to be inspired to give by an email campaign. A Millennial, on the other hand, might be more affected by social media marketing.

How do you plan a fundraising campaign?

Any fundraising campaign begins with research—which means you’re already on the right track!

More specifically, it’s important that you take your overarching goals, approximate timeline, budgetary restraints, communication strategy, delegation plan, and fundraising toolkit into consideration. That can seem like a lot, so we’ll go over each component in greater detail below.

Why is a political campaign fundraising plan important?

And if you do happen to get off track, you’ll have a comprehensive record to look back on and direct you as you shift your course.

How do you find political campaign donors?

Finding political campaign donors can be as simple as knocking on your neighbors’ doors or as involved as conducting in-depth research on prospective donors.

A major reason for the wide range depends on the size of the contributions you’re seeking. For example, while you might be able to collect a $20 bill from the guy down the street (which is appreciated, of course!), you’re not likely to be gifted a couple of thousand dollars that way. If you’re looking to reel in major donations like that, it’s a good idea to implement wealth screening for prospective donors before investing a ton of time and resources into a major gift strategy.

However, the biggest thing to keep in mind is that for local political campaigns, the vast majority of your donors will reside within the geographical limits of the election.

What are some helpful resources for political fundraising?

There are tons of available resources for political fundraising, ranging from educational guides (like this one) to provide you with valuable insights and strengthen your campaigns, to top-of-the-line software to help you actually collect the funds.

Helpful resources may include volunteer management tools, marketing and outreach software, and an online donation platform. Additionally, one of the most valuable resources that you can get is a carefully-crafted fundraising plan template. And lucky for you, we include one for free within this guide![boc_spacing height=”1px”]

Crafting your political campaign fundraising plan can be a big task. Luckily, the process can be further broken down into six simplified and actionable steps. Let’s walk through the main facets here: 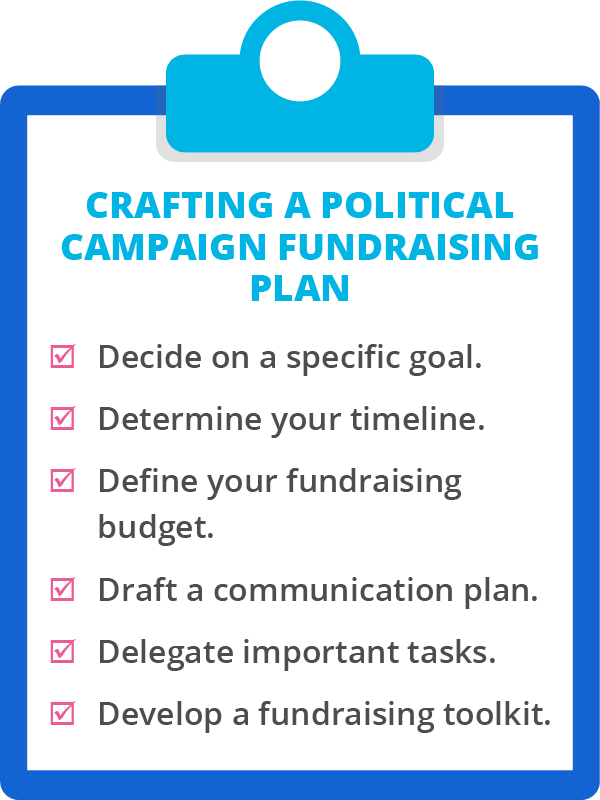 1. Decide on a specific goal.

Determine how much funding it will take to run an effective political campaign, and then use that information as a basis for your fundraising goals. For example, if you estimate that it will cost you $40,000 to campaign and win the upcoming election, set that as your goal.

As a general note, the best fundraising goals (or any goals, actually) should be SMART: By following these goal-setting guidelines, you ensure that your entire team is on the same page and working toward the same overall target. Plus, a top-notch goal can be a fantastic way to motivate both donors and fundraisers alike.

Not to mention, your fundraising goal will essentially function as the foundation from which you build the rest of your political campaign fundraising plan.

Your political campaign fundraising timeline should vary depending on two key factors—the date of the upcoming election and the scale of the campaign.

For example, while a presidential campaign might require fundraising efforts to begin several years ahead of time, a smaller local campaign for mayor or city council will likely begin closer to election day.

Generally speaking, there are three significant stages within a political campaign fundraising plan:

That being said, it’s a good idea to start building out your fundraising timeline by determining the date of the upcoming election. Then, begin working backward to fill out the remainder of your fundraising calendar, ensuring you give yourself enough time to raise the money you need to run for office.

Any fundraising budget is all about the relationship between your expenses and your revenue.

Your expenses are the money you spend upfront to raise more for your campaign—whether that’s your staff salaries, event-specific costs such as venue and catering fees, or your online fundraising toolkit.

Then, your revenue is the money you raise. Depending on the specific fundraising tactics you choose, that might include event ticketing costs, text-to-give revenue, and online donations.

Finally, you can calculate your fundraising profitability by subtracting your expenses from your revenue.

As a general rule, you should expect to spend about 10-15% of your overall fundraising goal in order to set your team up for success. So, going back to your theoretical $40,000 fundraising goal, you might spend between $4,000-$5,000 in overhead and fundraising costs.

Of course, the fundraisers with the highest ROI, or return on investment, are those that cost the least to run and bring in the most funding. And that’s what you should be aiming for on a larger scale! Luckily, there are free fundraising tools like Snowball that can help you to raise more on a limited budget.

Your communication plan is the key to building long-term relationships with dedicated supporters. That means it’s one of the most important aspects of your overall political campaign fundraising plan!

Here are a few tips to consider as you begin planning your fundraising communications:

As you adjust your marketing and outreach approaches to collect more fundraising revenue, it’s important to recognize the significance of an effective marketing tech stack. After all, strategic communication can be quite time-consuming without the right tools. But with top-notch software on hand, you can bring your outreach to the next level without having to invest a substantial amount of time and effort.

Your fundraising team is here to help you succeed, and effective delegation practices are important for any team that wants to work better collectively. With a fundraising team, that is absolutely crucial.

Keep these best practices in mind as you begin to assign tasks to individuals within your fundraising team:

Delegating specific tasks makes sure that everyone knows exactly what they’re responsible for to the overall team, as well as keeping too much responsibility from falling in the lap of one or two individuals.

Having a comprehensive fundraising toolkit is arguably the most important step in the entire fundraising process. That’s because it doesn’t matter how much thought you put into drafting the perfect goal or how great your appeals are if potential donors can’t figure out how to contribute to your campaign. And without a solid foundation of fundraising software to build from, you’ll be consistently losing supporters who don’t feel like jumping through complicated hoops to give.

We recommend that you start with:

Many of these tools can be purchased separately, or “a la carte-style,” which is often a go-to strategy for beginning fundraisers. However, we suggest you invest in a powerful, all-in-one fundraising platform that can cater to your every fundraising need.

That way, you don’t have to worry about manually transferring data between systems, but instead are met with a fully integrated system. Plus, comprehensive platforms are more easily scalable and often end up the cost-efficient solution in the long run.

Now we’ve discussed the main components of a successful political campaign fundraising plan—but it’s all still so theoretical. Here, we give you a practical tool for converting your big ideas into a detailed and accessible action plan.

Feel free to copy and paste this template to use for your own fundraising campaign!

Remember to make sure your fundraising goal is SMART—specific, measurable, attainable, relevant, and time-bound.

It’s important to keep your campaign timeline updated to ensure everyone stays on the same page.

Craft a basic overview of the marketing and outreach strategies you’ll implement to bring in donations.

You have to spend money to make money—but keep your spending under control with a detailed fundraising budget.

Here’s an example of a completed version of our political campaign fundraising plan template. Although the numbers do not reflect a real campaign, this should give you a better understanding of how to apply this guide to your own fundraisers:

To raise $20,000 in fundraising revenue through an online donation page, virtual auction, and text-to-give campaigns by June 1, 2021.

Hopefully, this guide has given you a closer look at what goes into creating a political campaign fundraising plan—and, even better, that you feel ready to prepare your own. With the right fundraising tools and a detailed agenda to follow, you should be all set to take on a fruitful campaign in no time. Good luck!

For more information on hosting a successful fundraiser, be sure to check out the following resources: